HDaerial provides the Cineflex Elite with the ARRI ALEXA camera. Now aerial videography, feature film quality is now affordable for any production anywhere in the world. To see an example of the Elite in action follow this link. The lightweight Cineflex Elite with the ALEXA camera provides a lower cost of operation than any other aerial gyro-stabilized system. The Odfjell and WTHR Air to Air projects were shot with the Cineflex and are great examples of the beautiful aerial images captured by this gyro-stabilized system.

The Cineflex Elite houses the ALEXA Super 35 camera and Canon 4k Digital Cinema Zoom lenses into the 5 axis gyro-stabilized Cineflex for an extremely stable aerial images in most weather conditions. Action scenes can now be filmed with high speed rates up to 120 frames per second. Lens choices include 14.5-60mm and 30-300mm zooms.

With onboard recording inside the helicopter and instant playback, maximum flight times can be achieved without the need to land the helicopter to reload film magazines or digital media. The  ALEXA camera extends the value of aerial videography by simultaneously recording ARRIRAW 2880 x 1620 files to a Gemini 444 and Apple ProRes 1080p to SxS media. Recording options include SxS 64Gb Pro Media, Gemini 444 ARRIRAW digital recorder, Sony HDCAM SR, AJA KiPro, and the NanoFlash. Other record decks available upon request.

The Cineflex Elite is an efficient choice for lowering aerial filming expenses. The lightweight Cineflex Elite system is less expensive to ship, than other gyro stabilized systems.

The Cineflex Elite can be rigged in one third the time it takes to rig Super 35 format digital camera systems. 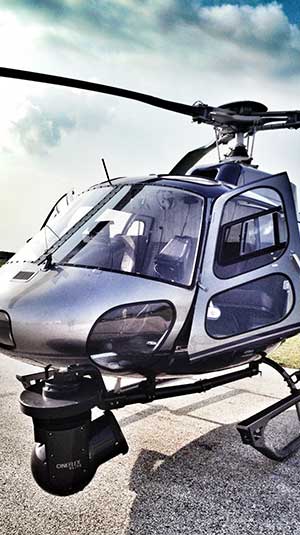